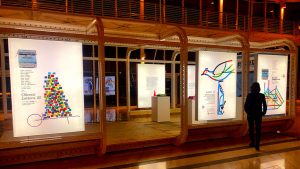 January the 20th, In the corridors of the Puglia Regional Council building a first online version of LETTERE SOSPESE (Pendant Letters) was presented, an installation dedicated to the famous typewriter Lettera 22 that Adriano Olivetti introduced in Italy seventy years ago and which soon became an emblem of Italian design and a working tool for journalists, writers, intellectuals.

Seventy typewriters, as many as the years of its anniversary, reproduced in 3D and hung from the pylons of the roof, descend to different heights along the corridors, creating a spectacular suspension effect. Quasar Institute for Advanced Design was commissioned the production of the typewriters used in the Pendant Installation Under the supervision of Prof. Alessandro Gorla (Coordinator of the Master in Product Design Made in Italy). The President of the Puglia Regional Council Loredana Capone and the artistic director Francesco Carofiglio were the protagonists of the first run special curated by the journalist Annamaria Ferretti. 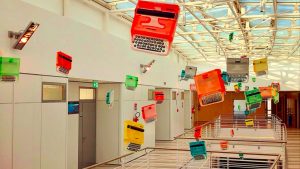 The Exhibition is surrounded by a series of talks by Design Experts, Art Historians and Journalist, for discussing the Lettera 22 impact in the society of that time,  and will be on showcase until March the 1st in the Puglia Regional Council building.