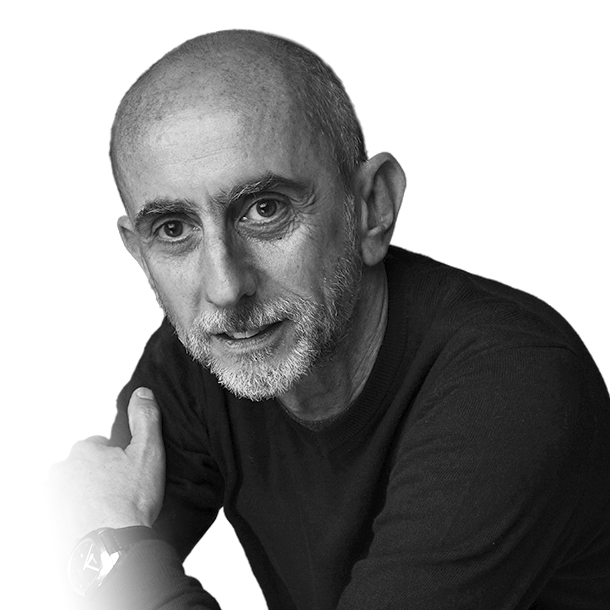 Graduated from the Gymnasium, he attended the Faculty of Architecture in Rome before choosing the European Institute of Design in Rome at the end of which he obtained his diploma in Graphics in 1988. At the same time (1986-1988) he acquired his first professional experiences as a junior graphic designer at the PRO.DES Agency. in which he follows the graphic design of exhibition areas for companies of the IRI-Finmeccanica Group (Energy sector), for ENEA, for ENEL, for ILVA.

In 1989, he is a founding partner of StyloGrafica Visual Communication, a studio he belongs to until 1994.

In 1991 he obtained the position of teacher at the European Institute of Design in Rome in the Graphics Department, until 1993 realizing the desire to be able to transfer his experience and establish an exchange and constant comparison with students.

In 1994 he taught at ICEI Multimedia in the Computer Graphics Department until 1996.

In 1994 he was a founding partner of the studio Grafò Comunicazione Visiva, which he guides and with which he still signs his projects today (25 years in 2019).

With the Grafò studio, competence and experience grow with particular reference to the cosmetic, pharmaceutical and medical sectors.

He develops particular expertise and experience in Packaging Design.

He designs product lines for Antica Erboristeria SpA, for the Pierre Fabre Group he follows the Dolisos homeopathy brand; for Pidielle SpA he has followed the Elgon brand (professional area) for over a decade.

In other product sectors it follows: BMG for Corporate events; Columbia Tristar for the HomeVideo division; Sony Entertainment for the PlayStation brand; for AS Roma Calcio, in 2001, he designed the official mascot and declined its official merchandising.

From 2007 to 2012 he was a speaker for the FIF- Italian Fitness Federation and IDA-International Dance Association on issues related to the Communication area.

The search for free, personal and independent planning led him to independently develop projects and initiatives of social utility aimed at the Third Sector, specifically aimed at the Non Profit area. The activity meets immediate interest of the institutions and active participation of profit companies by creating a link between Resources and Content.

It carries out awareness and fundraising campaigns for DEBRA Italia Onlus, ANFFAS Onlus, AIL-Italian Association against Leukemia-Lymphomas and Myeloma. For the AY 2017-18 and 2018-9 he collaborates with RUFA Rome University of Fine Arts, (Graphic Design department) alongside the role teachers in the management and promotion of projects on real commission, intended for students.

Starting from November 2020 he is a professor at QIAD – Quasar Institute for Advanced Design for the three-year course in Graphics and Visual Communication with the Design System subject.